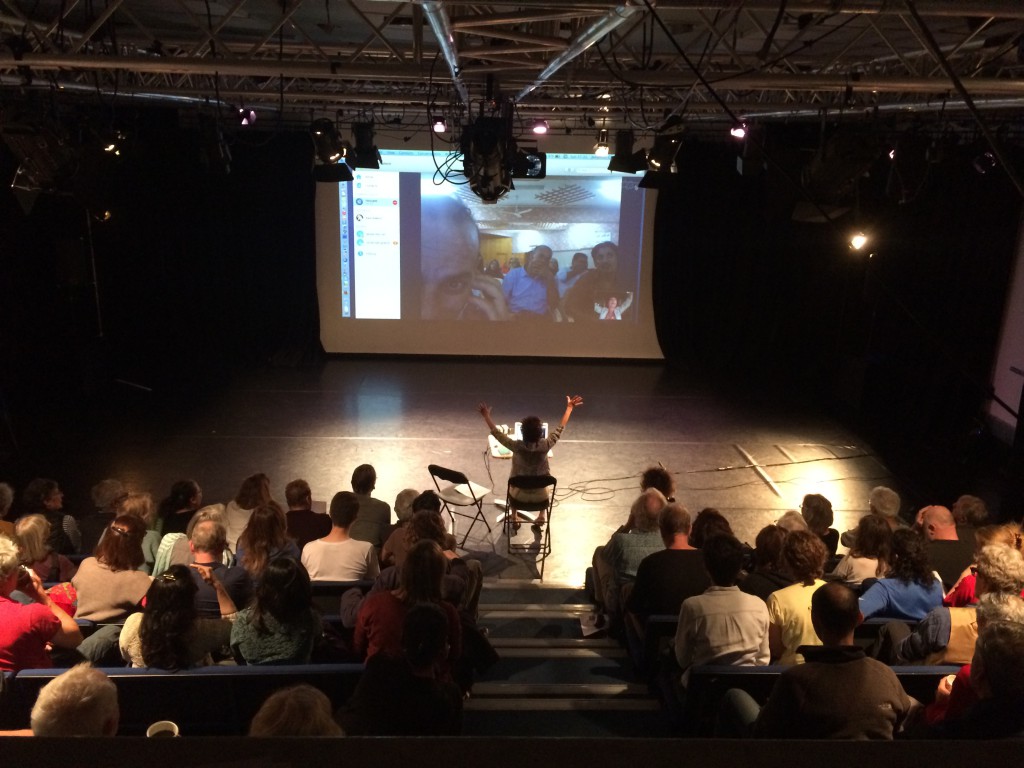 The SIMULTANEOUS – WAR & PEACE – GAZA/LONDON event at Al Meshal Cultural Centre, Gaza City and Rich Mix, London on Sunday 13th September was very successful.  Audiences and artists in Gaza and London were moved, thrilled and enlightened by the exchange we were able to have.

The audience of 90 people in London really liked Theatre for Everybody’s workshop version of Leo Tolstoy’s War and Peace that we showed on video.  One comment: ‘This was a really passionate piece of theatre and I suddenly realised how powerful the didactic methods they used were.  It was epic!’.

In Gaza, the work was once more received with great acclaim.

Comment: “Sure, the production was very nice and the acting was good but what made this special was the light and hope it brought to our lives here in Gaza.”

And by the way, the whole event was filmed in Gaza and in London by Venezuelan TV channel, Telesur for inclusion in a cultural review programme!

Read the ‘We Are Not Numbers’ review of Az Theatre and Theatre for Everybody’s SIMULTANEOUS – WAR & PEACE – GAZA/LONDON event at Al Meshal Cultural Centre in Gaza and Rich Mix London on Sunday 13 September:

“Thank YOU for organising this thrilling play/event. I hope there is more to come with Theatre for Everybody” Mohammed Alhammami We Are Not Numbers.

“that was a marvellous and inspiring evening event, and I just want to congratulate you on this extraordinary exchange – so thought-provoking, so moving”

“The political resonances were startling – like Shakespeare Tolstoy keeps giving, identifying the big ideas, the struggle between allegiances, the possibility of love of human contact in war….The exchanges over skype were as dramatic as the presentation, inspired by the presentation no doubt.”

LOOK AT THE EVENT PROGRAMME: SIMULTANEOUSprogramme