Az Theatre and Theatre for Everybody are presenting Simultaneous – War & Peace – Gaza/London at Rich Mix on Sunday 13th September 2015 at 4pm.

We are showing a video of Theatre for Everybody’s workshop production of a stage adaptation of Tolstoy’s War & Peace.  At the same time there will be a live presentation of the very same work in Gaza.  Then we will link up the two audiences via Skype live between Gaza and London. 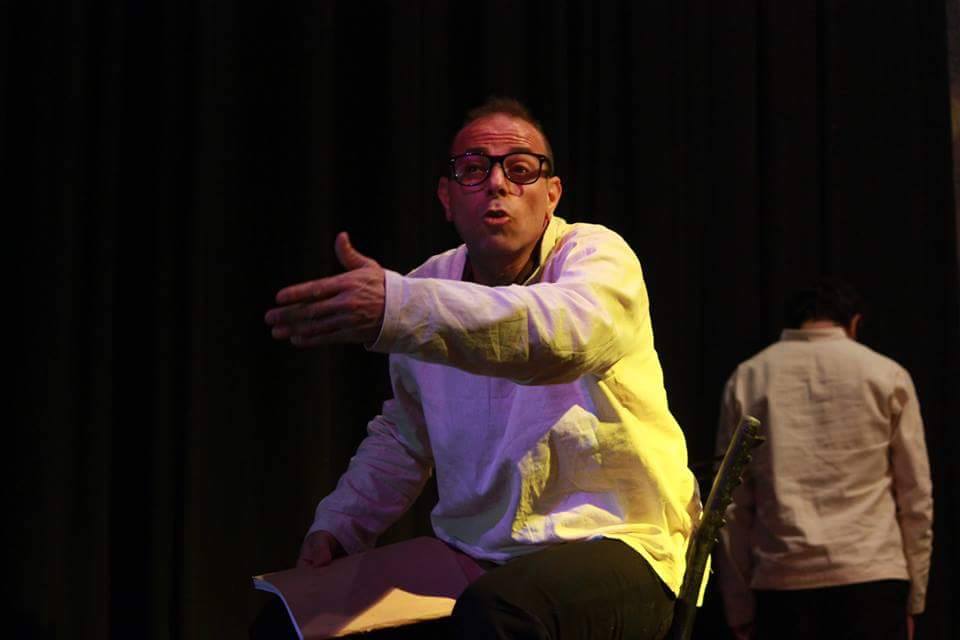 Above is a photograph of Hossam Madhoun in the role of Pierre Besukhov from Theatre fro Everybody’s production.

During the lead-up to this event we are asking people to ‘revisit’ the messages that Hossam Madhoun sent us during the ‘war’ on Gaza.  Operation Protective Edge was launched by the Israelis on 7th July 2014.

And we are asking Hossam to comment now as he looks back at what he wrote last year.

Here is his message on 3rd July last year: Unable to be wise.

I asked Hossam in a recent telephone conversation how he felt now about the events a year ago.  His response was to send the piece below and then his friend Basel al Maqousee (find out about Basel’s work here) read this and sent us this piece of digital art, a homage to Gaza and Picasso: 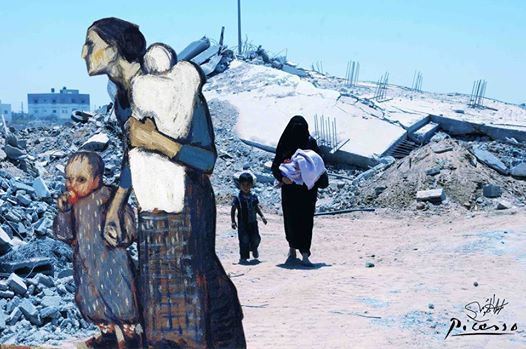 Here is Hossam’s recent writing about the aftermath of the war a year later:

And here we are..
One year after the war..
Here we are we still alive after the war
We’re still eating and sleeping
We’re still going to work, watching TV,
Going out with friends who are still alive,
Visiting family members who survived,
Walking in the streets that don’t look like themselves any more
Meeting people who are not themselves any more
No one stays the same,
After the war
Mohammad celebrates his daughter’s birthday in the rubble of his house
which was bombed in the war,
Remembering a wife and a son,
A wall and a door,
A bed and calm evenings,
And memories that went with the war
Samira, the 7 year old trying to catch her doll, but she doesn’t find her
hand,
It went with the war
Ali’s mother still prepares food for six people,
Her husband is unable to convince her that three of her sons went with
the war,
She still believes that they will come back, and when they come back,
they will come back hungry…
One year after the war and we still go to the Cafe and play cards,
Drinking our coffee without sugar,
Smoking our hubbly bubbly,
Showing our latest selfies on our Facebook pages,
But our photos are not the same as one year ago,
Our photos are not the same as before the war,
Darkness fell over our photos despite the flashlight
Nothing remains the same after the war
And there are different kinds of wars, my friend
There is war from the sky, from the land, from the sea,
In the war from the sky, bombardment comes from everywhere; you
cannot predict when and where it will strike, so you cannot hide, and
you stay still
Waiting for death with a strange involuntary smile on your face
In the war from land, you also don’t know when and where the shells will
fall
So again you cannot hide, and you stay still
Waiting for death with a strange involuntary smile on your face
Wars are a very strange thing, difficult to describe, my friend,
War ends and you believe you survived, but after a while you realize that
the war is still going on within you, chasing you in your dreams, in the
destructions around you, in the funerals and the sad faces in the streets
and the markets,
In the sorrow of those who lost their beloved relatives
Wars do not end or leave simply,
Suddenly your 11 years old child wets their bed, and your wife has
nightmares,
You too, but you don’t admit it!
Your clever daughter is getting very low marks at school and she
doesn’t know why,
Suddenly your kind and nice neighbor doesn’t stop yelling and shouting
at his wife and kids
Day and night and no one can stop him,
Your eldest son wakes up in panic with any strange sound
A knock at the door, a cup falls and breaks, a fast car’s wheels scream
in the street
After war, nothing remains the same.
Before war, there were no people living in a half-destroyed homes or
sheltering in schools,
Before war there were no children or women looking for something to
eat in the garbage
Before war there weren’t thousands of beggars of all ages, children,
youth, women, men,
Before war there weren’t 50.000 people without homes
Before war there weren’t 800,000 children suffering from fear,
nightmares, bed-wetting, sleep disturbance, anxiety,
Before war…
Before war …
Before war…
And after the war????????????????????!!!!!!!!!!!!!!!!!!!!!!!!!