You want to read the some of the documents relating to the creation of this project?

This is the story so far:

In 2009 we supported Theatre for Everybody’s production of Guernica by Arrabal.  It was presented at a theatre festival in Gaza.  This was the event we organised:

“This extraordinary play about the Falangist/Luftwaffe bombing of the ancient Basque town during the Spanish Civil War, including its haunting images of Picasso’s painting and its tragic comic dialogue between a man and his wife who is stuck on the toilet during the bombing raid, was first produced in 1961.

In 2009 we launched our Gaza: Breathing Space project. This project carried out in Gaza in 2010 involved Theatre for Everybody working with young people in need in two rehabilitation centres, Jabalya and Deir El Balah.  This is how we presented this project:

“GAZA: Breathing Space is Az Theatre’s next collaboration for the Gaza Drama Long Term project and it will take place during the Autumn of 2010.  Az Theatre’s ten-year project Gaza Drama aims to improve the lives of young people in Gaza and develop an international dialogue about the use of theatre and the impact of violence on future generations.

BE ONE OF 450 – As one of 450, you will contribute to a  drama therapy programme in Gaza being carried out by a small theatre company ‘Theatre for Everybody’ in conjunction with community mental health organisations in Gaza.

This programme will last 8 weeks and will allow 40 young people to work through the suffering of their daily lives through theatre.

On Saturday 30th October 2010 we presented an event at Soho Theatre, London focused on the Gaza: Breathing Space project.”

In November 2011 Jonathan Chadwick visited Gaza and this is the film he shot about life in Gaza at that time and the impact of the Gaza: Breathing Space project.

LEARN MORE ABOUT THIS FILM

In the autumn of 2011 and throughout 2012 Az Theatre and Theatre for Everybody worked to create a project that brought young people who were deaf or with impaired hearing together with young people who could hear.  This is the way we presented this project:

Why not buy a ticket for a show you will never see?

Pay us what you would for a theatre ticket £5? £20? £45? and for eight weeks 20 young people in Gaza, deaf and hearing working together, will have a drama experience of a lifetime!

We need to raise £12,000 by finding 480 people who are willing to pay on average £25 towards our GAZA:OPENING SIGNS project

The GAZA OPENING SIGNS project is a programme of training and drama workshops for deaf and hearing children in Gaza run by Theatre for Everybody. They are training in signing and will train a deaf drama workshop facilitator especially for this work. The workshop programme will start in September 2012.

We created an exchange programme between the young people in Gaza and students at a College Park School in Westminster, London.

We launched this project at an event on Sunday 14th September 2014 at Rich Mix, Shoreditch, London.

For a comprehensive illustrated report on War & Peace: Gaza (Palestine)/London (UK) up to May 2016 please CLICK HERE

Event programme: look at who was involved and read more about the event: ProgramVersion1JC2

We ran another event on Sunday 18th January 2015 at Rich Mix, Shoreditch, London where we made a public reading of Jonathan Chadwick’s stage adaptation of RESURRECTION by Tolstoy and held a conversation via skype with Hossam Madhoun and Jamal Al Rozzi in Gaza.

Read more about this event

On 9th May 2015 Theatre for Everybody presented their workshop version of Tolstoy’s War & Peace at the Al Meshal Cultural Centre in Gaza City.

Here is a review of the performance published in Al Watan

Here is a TV report from Russia Today

On Sunday 13th September 2015 Theatre for Everybody made another presentation of the workshop version of War and Peace at the same venue. This time the creative team of ten people had an audience of 190 people. At the same time in London an audience of 90 people watched a video of the first presentation and then there was a conversation between the two audiences in Gaza and London via live video link.

A short film was made and networked internationally by Telesur about the preparation and performance of this second presentation. View this on Youtube

Here is a photograph from the SIMULTANEOUS event showing the live video exchange on Sunday 13th September at Rich Mix, London and Al Meshal Cultural Centre in Gaza:

As a result of the presentations of the workshop production of War & Peace by Theatre for Everybody in Gaza many people, especially young people, approached the company asking to be involved in our project.

We sent the £1000 raised through the SIMULTANEOUS event to Theatre for Everybody to work with a group of young creatives in Gaza.

We called this work UNFORESEEN and we worked towards an event on January 24th 2016 when we presented the work and a video link-up between the audience in London with the young artists in Gaza.

Here is the programme for the UNFORESEEN event on Sunday 24th January 2016:

You can find out more about the young artists from Gaza and see their spoken word videos by visiting the Az Theatre blog.

You can see a video of the UNFORESEEN event on vimeo here: password is: Gaza2016 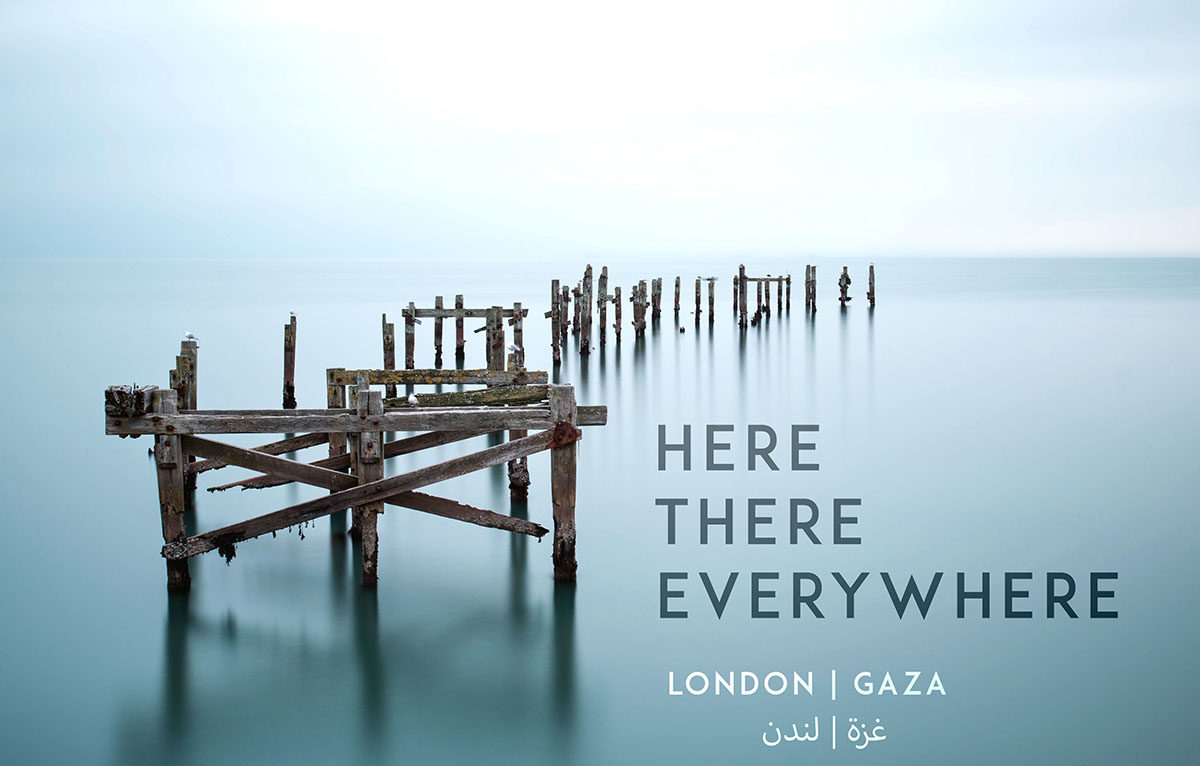 The events featured a live exchange between community activists in Gaza and in Rojava, Northern Syria organised in partnership with Peace in Kurdistan.  We also showed Mohamed Jabaly’s AMBULANCE http://www.ambulancegazafilm.com and Antonia Caccia and Maysoon Pachachi’s groundbreaking documentary VOICES FROM GAZA (1989) in celebration of the 30th Anniversary of the Palestinian Intifada: https://www.allmovie.com/movie/voices-from-gaza-v270768

This programme was organised with help from International State Crime Institute, SOAS Centre for Media and Communications, Philipa Harvey from the National Union of Teachers, Mark Beacon from UNISON, staff members at the Islamic University of Gaza, Palestine Trauma Centre, UK-Palestine Mental Health Network and Theatre for Everybody.

HERE THERE EVERYWHERE: GAZA-LONDON is the latest phase of a ten-year cultural exchange partnership between Az Theatre (London) and Theatre for Everybody (Gaza).  For more information: https://aztheatre.org.uk/wordpress/gaza-drama-long-term-2/

In August 2018 the Al Mishal Cultural Centre where Theatre for Everybody presented War and Peace was completely destroyed by aerial bombardment by Israeli armed forces. Az started a world-wide campaign to rebuild a cultural centre for Gaza. Find out more here

THE EMIGRANTS in GAZA

Read the review of THE EMIGRANTS in Al Adhaf News

Please read our brief report on this project