The Al Mishal Cultural Centre in Gaza was destroyed by an Israeli airstrike on the 9th August 2018. 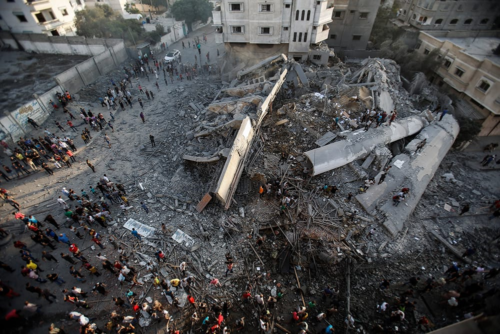 The Al Mishal Centre was the only working theatre left in Gaza.  It was the venue of choice for theatre companies there and housed many arts projects.  It was the centre of the cultural and artistic community in Gaza.  READ MORE

Working with our friends in Gaza we immediately protested against this destruction and now we have pledged to rebuild a cultural centre for Gaza.

Az Theatre (London) is working closely with the HEAT Collective (New York) to share our project.

We are producing a film that will show the depth and breadth of culture and arts in Gaza and promote our project.  The film will be made in Gaza.  UK based theatre and film director, Caitlin Mcleod is working with the the team in Gaza, UK and USA

We are planning a global architectural contest that activate imaginations and skills internationally working with the creative community in Gaza.  We aim to work through an international network of arts and community centres to promote our project.

The story so far……