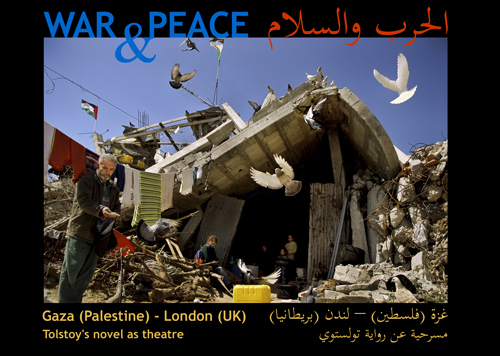 Our War and Peace: Gaza-London project is a collaboration between Theatre for Everybody in Gaza and Az Theatre in London.

Read about aims below or go straight to the heart of the blog which will tell you what is happening now.  Here

The aim is to develop and produce an Arabic stage version of Leo Tolstoy’s WAR AND PEACE, to be rehearsed and presented by an acting company and production team from Gaza, directed by Jonathan Chadwick, opening in Gaza and performing in Cairo, London and Berlin.

Gaza: War and Peace would be the latest phase of a ten-year project started by Theatre for Everybody and Az Theatre in 2009 called Gaza Drama Long Term. There have been three other phases so far:

Gaza: Guernica, a production by Theatre for Everybody of Fernando Arrabal’s play, Guernica. Az worked with Soho Theatre on a parallel reading of the play, raising awareness and support.

Gaza: Breathing Space, producing support events in association with Soho Theatre for two programmes of drama and well-being workshops for young people in Jabalya and Deir Al Balah Rehabilitation Centres and the production of THE GAZA BREATHING SPACE FILM.

Gaza: Opening Signs, a training and workshop programme for deaf and hearing young people at Deir Al Balah Rehabilitation Centre making a creative exchange with a group of young people at College Park School, Westminster, London, using signing for the deaf and engaging with theatre for the deaf.

Gaza: War and Peace will create a production based on an original Arabic adaptation. Our aim is to create a literary and theatre production project in Gaza that engages with, and develops, a wide range of literary, performance, design and technical skills