A year ago in the opening days of the attack on Gaza Hossam sent us a dramatic dialogue of a family talking at home: 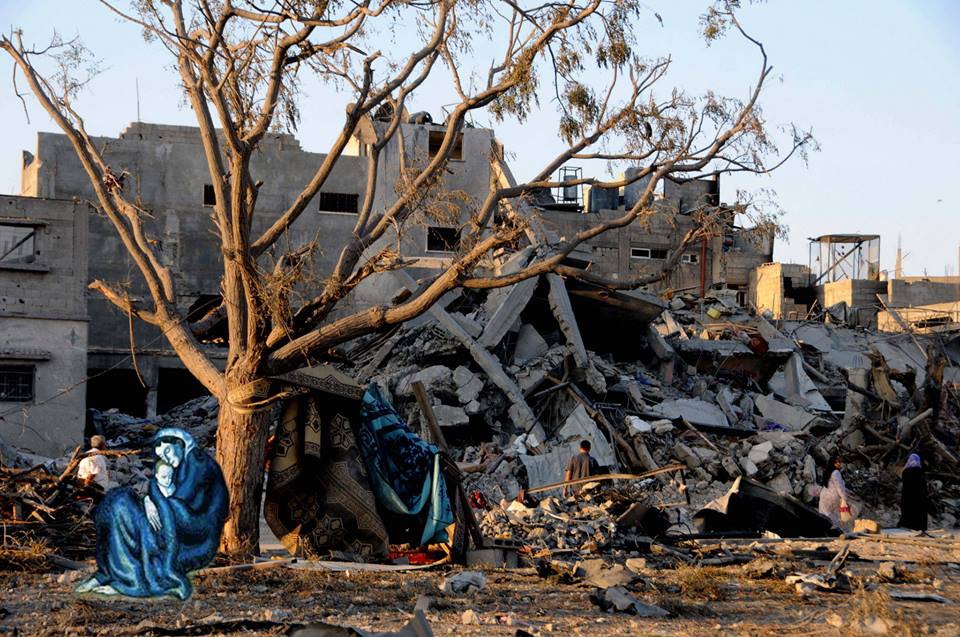 A few days ago he sent, along with the digital montage art above by his artist friend Basel Maqousi, this new dramatic dialogue of a man and a woman and their daughter talking at home:

What days, may God never repeat them, the woman said

It’s terrible, everybody posts photos of killed children on facebook,

All the TV channels are showing reports from the war.

Turn the TV off.

And on the radio!

You don’t need to listen to the radio.

I was trying to sleep as much as I could just to escape from my fear, the daughter said.

You were the brave one, my dear, the man said.

I was in a panic.

Sure, it is normal in war, we were all in a panic, my dear.

When Mum was going to the hospital to work, I was praying all the time until I saw her come back home again.

Your mother is very brave.

Do you remember the night when they bombed Shujaiya?

I am trying to forget it!

That was one of the scariest nights.

How many people took refuge at our building?

About 200 men, women and children, they arrived with nothing!

Yes, our neighbors were kind and generous.

How did the basement accommodate all of them?

Some were housed in their relative’s apartments.

And the food, it was Ramadan but all together we succeeded in feeding every one of them for 47 days.

Are we going to spend the evening talking only about the war?

Do you have something else to talk about?

Are we going to survive the next war, the woman said

Why do you say that, there is no next war, the man said

Sure there is. What’s changed, have the Israelis fallen in love with us?

No, but the world will not allow another war in Gaza.

Really? Why? What has the world to do with us? You are naïve if you believe the world is busy thinking about us.

I mean, why there should be another war?

Same reasons as for the previous wars

So there will be no war.

Yes, there will. And again, do you believe we will survive the next war?