We just received this message from Hossam Madhoun, Co-Director of Theatre for Everybody in Gaza.  With it we received this digital art by Basel Maqousi 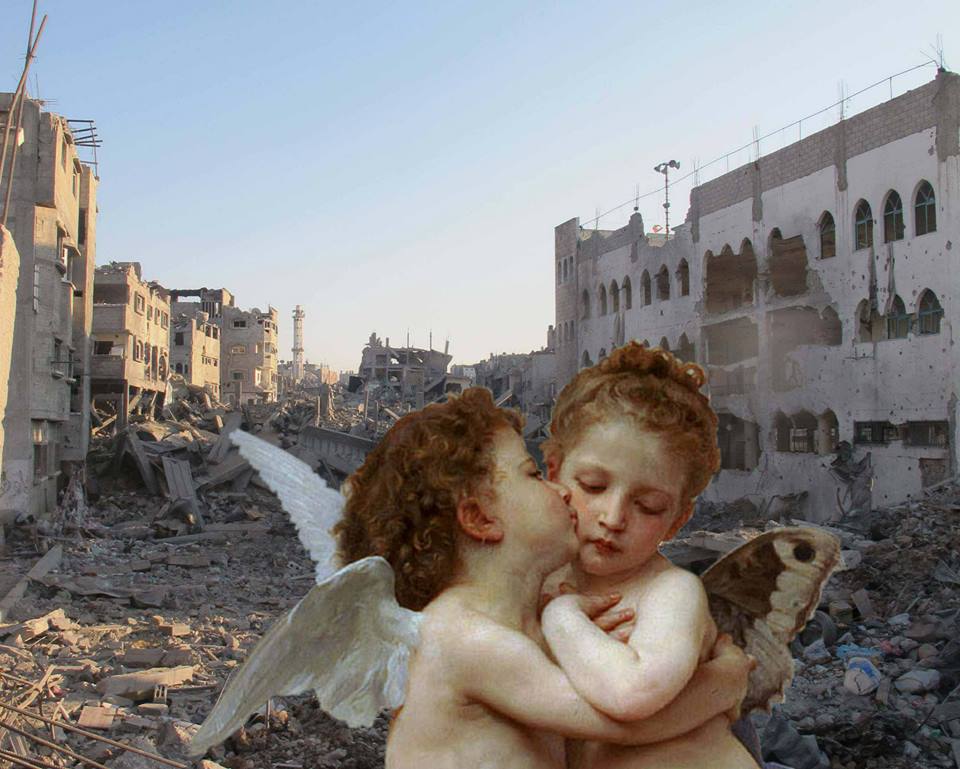 Az Theatre (London) and Theatre for Everybody (Gaza) are exchanging messages remembering the war last year.

‘Are we going to spend the evening talking about the war?’ I said.

‘Do you have something else to talk about?’

Walking on Gaza beach, the sky is so clear, millions of stars, some are shining more than the others.

I remember when my little brother, Mazen, died 35 years ago.

My grandmother told me that he went to the sky and he will always be shining up there. He was a year old, I was 9 years old and I believed her.

I used to go to the roof of our house and look at the sky, choose the most brilliant star and talk to it as if it was Mazen.

On the dark nights when I couldn’t see the stars I cried, believing that Mazen was upset with me. I complained to my grandmother and she used to tell me: ‘No, he’s not upset with you, he’s just playing with the other children, that’s all, he will come back tomorrow or the day after’. I believed her.

My feet trudged on, the sandy beach enfolding every step, 15 minutes walking and I felt tired.

I sat down, in the silence, no-one nearby me, just me and the sea and the shining children in the sky, very calm, relaxed, and I was able to hear my heartbeats.

A family arrived and sat some meters away from me. They talked and I tried to ignore them. Not easy, they were loud.

‘We were 11 last year, may God bless their souls’, a woman said, ‘Ahmad would be in 8th grade now’

They are talking about another star, shall I tell this mother that her son is lighting our dark night? For a moment this naïve idea passes through my mind.

‘Mariam wanted a drink but the kitchen was bombed and all of us were hiding in the bedroom. Half of the house was destroyed. Ahmad was in his mother’s lap bleeding and we couldn’t do anything.’

‘Three days stuck in the bedroom, the bombing all around us, some very close, some not and we were all praying and waiting for the shell which would end our lives’

‘On the second day at sunset, Ahmad stopped breathing. His mother refused to put him aside, she kept holding him in her lap. She was not crying, none of us were crying. I believe we lost the ability to cry at that time’